Considering it is late June, we had an unusually cool and cloudy day today. I took advantage of the weather and enjoyed an afternoon walk at Heritage Park in Blacksburg. This park is also known locally as the “Old Brown Farm”, and I find myself walking there fairly often because I enjoy the open fields and big views of Brush Mountain.

Today the old fields were saturated with tall stands of daisy fleabane. These daisy-like wildflowers are native to North America, but their ubiquitous nature might make you think of them as a “weed”.

Daisy Fleabane is an erect, well-branched annual that can grow up to 5 feet tall. The aster-like flowers are borne in loose clusters at the top of the plant. Each flower head is 1/2 to 3/4-inches wide and is composed of a yellow center of disk flowers surrounded by 40-100 white ray flowers. Sometimes the ray flowers are pinkish or lavender. The flower buds are hairy.

The leaves are alternate, lanceolate or oblanceolate, sessile (no petiole)*, and sparsely covered with tiny hairs. The margins of the leaves at the bottom of the plant are coarsely toothed. The stem leaves may have fewer teeth.

The central stem has ridges and is covered with white hairs that stand out from the stem. The hairs are more dense at the bottom of the stem.

Daisy fleabane is a common site along roadsides, in pastures, and in any kind of disturbed field or lot. In earlier times, it was thought that dried fleabane could rid the house of fleas. The name translates as flea-poison.

*The leaves of Daisy Fleabane do not clasp the stem; see the earlier-blooming Philadelphia Fleabane for comparison.)

Daisy Fleabane: fine hair on the leaf and flower buds

A field of Daisy Fleabane at the Brown Farm 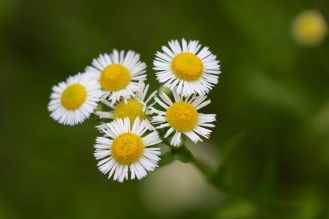 Leaves are sessile but not clasping 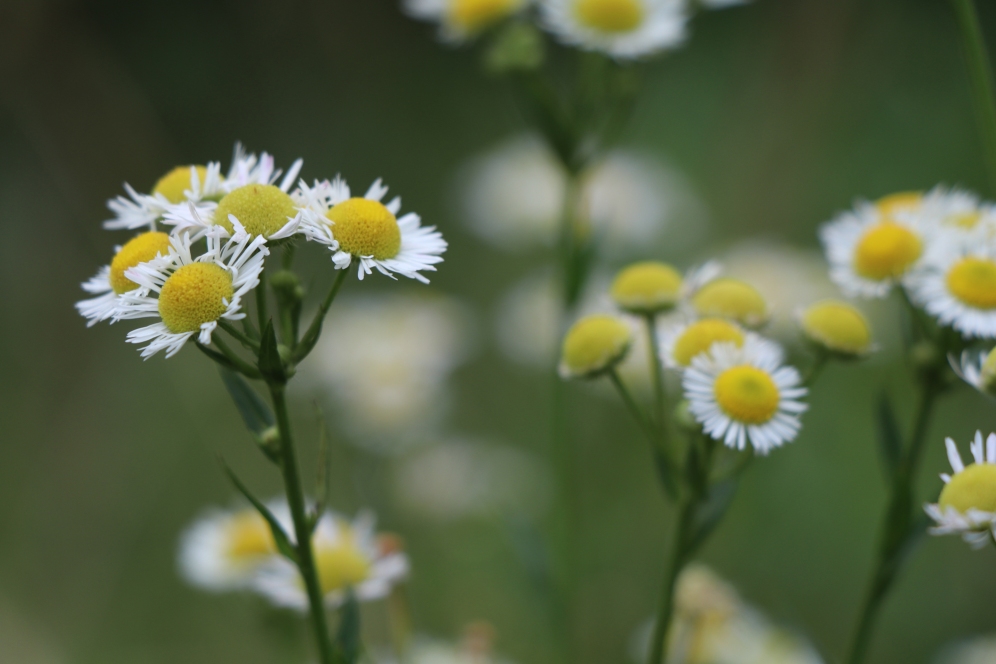