Just when I thought that the growing season had advanced to the point where no new flowers would come my way, surprise–here comes Stiff Gentian!  Members of the Gentian family offer great late-season color, especially in the realm of blues, purples, and violets.

Stiff gentian differs in a few significant ways from the other gentian species found on this blog, like closed gentian or balsam mountain gentian.

Stiff gentian is a mountain species that grows to about 2 ft. in height.  It bears numerous clusters of violet to lilac tubular flowers that open into 5 pointy lobes.  The narrow flowers are held strongly upright, hence the name “stiff gentian”. The clasping, deeply veined leaves are opposite, sessile and roughly ovate (the oval leaf is wider toward the stem end and narrower toward the tip).

Stiff gentian is also known as five-flowered gentian, maybe because the clusters of flowers often, but not always, occur in groups of 5.

In the past, stiff gentian had numerous medicinal uses, including treatment for fever and pain.

This is a native annual or biennial and spreads by seed (not vegetatively through rhizomes). Bloom time is August through October.

The flowers in the gallery below were found in two very different locales: The lighter flowers were found in Shawsville in September last year (woodland setting; limestone soils; elevation 2,000 ft or so).  The darker flowers with darker leaves were found in Grayson Highlands in late August (open meadow, elevation almost 5,000 ft).

Stiff Gentian in the woods near Shawsville, VA

Paired opposite leaves, are sessile, entire; rounded clasping base 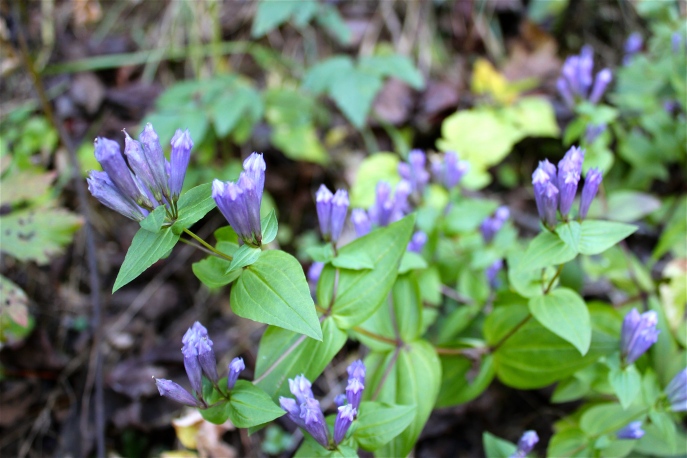 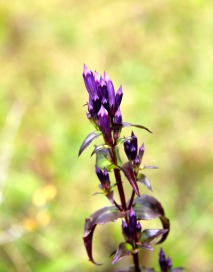 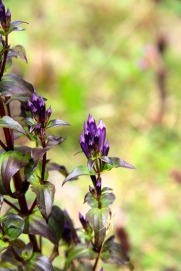 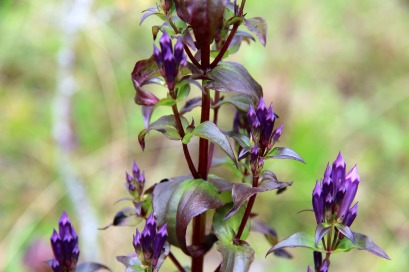