Chicory, blue sailors, wild succory, coffeeweed, or cornflower…whatever you want to call it–how can you not LOVE the bright blue flowers of this tough little wildflower?

In a summer field, chicory stands out because of its tall, rigid stems that almost appear woody.  Here and there along the stem appear aster-like flowers in a soft country-blue.  The petals of each flower are neatly squared off and notched in a delicate fashion.  On close inspection, the erect stamens in the center of the flower are vibrant blue, and somewhat transparent.  To see and appreciate the beauty of common chicory you will have to get up early, because by late afternoon the flowers close up for the rest of the day!

Far below the flower stalks, the base of the plant is a whorl of leafy greens that grow from a thick taproot.  Many say that the plant leaves resemble dandelion.  The leaves are edible, but bitter, and apparently they improve greatly in flavor with blanching.  The roots can be dried and ground and used as a sweet coffee-substitute or coffee additive.  Extracts of the roots and leaves have a wide-range of medicinal uses including both laxative and diuretic effects; other uses include sedative, anti-inflammatory agent, and even as a de-wormer for farm animals.

Common chicory has an ancient past, having long been used as a food source, medicinal herb, and forage plant by many cultures around the world–especially in Europe.  It was introduced to the United States for the same purposes during colonial times, but it soon escaped into the wild.  Today it still grows as a wild perennial in pastures and along roadsides, enriching the lives of foraging mammals and even the occasional, camera-wielding nature enthusiast (like me!).

Look for chicory blooming in late summer: July through October in Southwest Virginia. 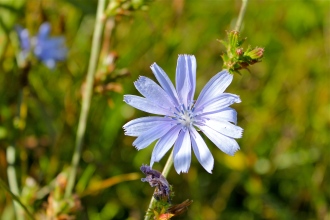 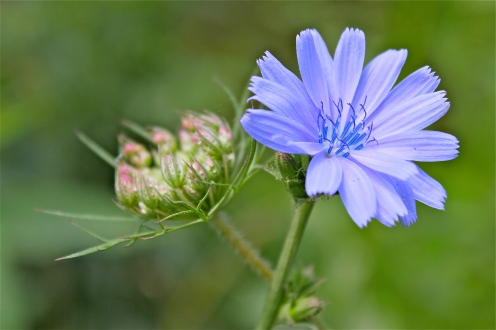