This native perennial of moist and sunny places begins blooming in late summer and has a confusing look-alike called wingstem, Verbesina alternifolia, which blooms at about the same time.  They often occur together in the same area..

So let’s compare them:  Crownbeard and Wingstem are relatively tall plants with winged stems. Each is topped by clusters of dark yellow, aster-like flowers. They are both composites–that is, their flower heads are made up of a circle of disk flowers in the middle and row of ray flowers around the outside. They both bloom in late summer, and they both look rather unkempt, due to the odd number of ray flowers that appear on each bloom. Of the two, wing stem generally has more petals.

So, how do you tell the difference between them?  Note that most of the flowers of Crownbeard  have only about 2-5 ray flowers, but usually only 2. By comparison, the flowers of Wingstem have 2-10 ray flowers (but usually many more than 2).  More importantly though, the leaves of crownbeard are opposite, broadly ovate and gently toothed, whereas the leaves of wingstem are alternate, lanceolate (long and narrow), entire to serrate, and very coarse to the touch (like sandpaper). (In other words, the best way to distinguish them from each other is by the LEAVES!) From year to year as I learn, and then forget (!) this traits, it helps me to remember that CrOwnbeard is Opposite.

Take a look at the photos below, and then go back and look at the leaves of wingstem.  Hopefully they are not so confusing now!

Bloom time is August and September.  Another common name for this plant is stickweed. 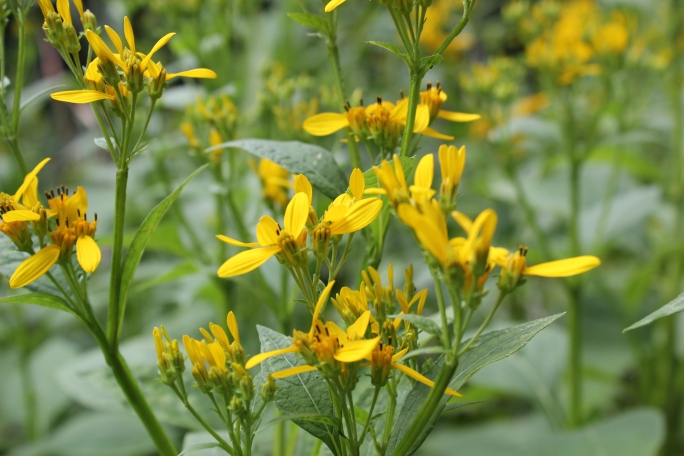 Leaves and stems of Crownbeard

A stand of Crownbeard growing near Pandapas Pond 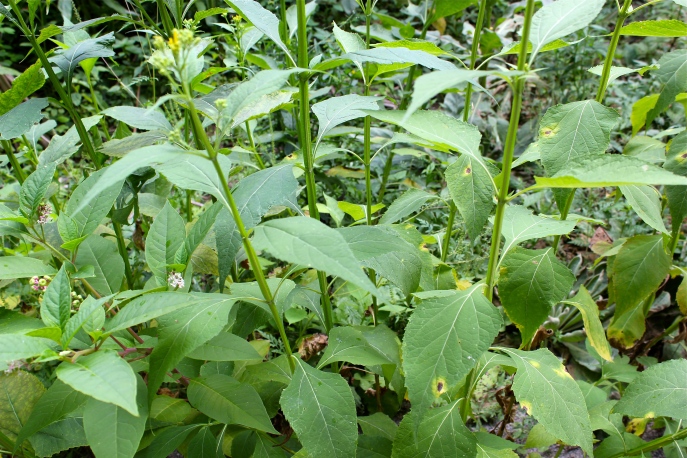 Leaves and stem of Crownbeard

leaves of yellow crownbeard: broadly ovate; petioles grow all the way down the stem to form “wings” on the stem

chomp, chomp: I think the leaves of yellow crownbeard are delicious! 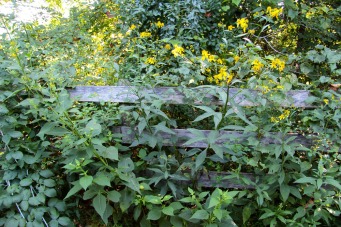 Crownbeard and Wingstem growing side by side