Popping up from below the forest leaf litter–look at this: is it a plant? A kind of fungus? If you are familiar with Indian Pipe, you might guess that these two organisms are related, and you’d be right.

Pinesap, like Indian Pipe, is a non-photosynthetic flowering plant that gets its energy from organic matter in the soil. Specifically, pinesap is feeding on fungi that live in the soil. Technically, that makes this plant a myco-heterotroph.  Most flowering plants are autotrophs, so this way of “making a living” definitely relegates pinesap to the “oddity of nature” category. That said, isn’t it cool?

There is no real stem–the entire structure above ground is the inflorescence. Little leaf-like scales growing along the stalk are actually bracts. And each stalk holds clusters of small flowers, each about a half-inch long. As pinesap emerges from the soil, the flowers are nodding downward, as in the photo above. As the plant matures, the flowers raise their heads upward. Each flower eventually gives way to a seed capsule.

Early blooming pinesap is cream-colored to yellow, while fall-blooming plants can be pink to red. The photos of red pinesap in this gallery were taken in late August in a damp forested area near Pandapas Pond.

The name of the plant is derived from the location where the plant is usually found, which is under pines. Another common name for it is Dutchman’s Pipe. 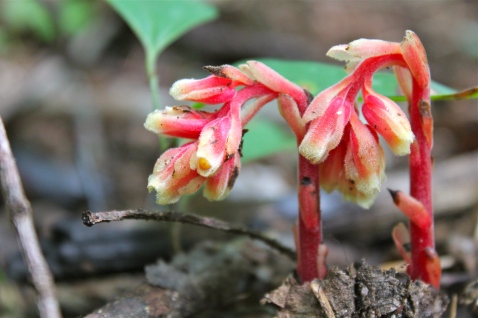 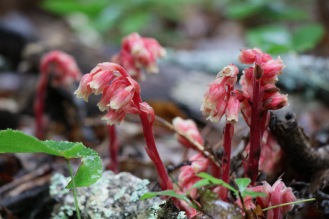 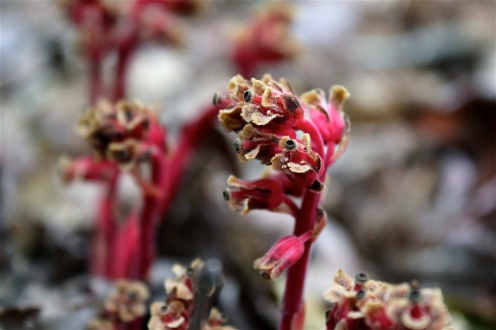 Here is a photo of pinesap coming up in late July at Pandapas Pond.  Early blooming pinesap is yellow.